The first twinkling of an idea for an irrigation system happened in 2002 when Ben was taking an irrigation class at Edmonds Community College as part of his degree programs there. The project was resurrected in 2007 when it became clear that the watering needs of the garden had grown beyond what we could reasonably handle. Dan was hand watering 4-6 hours a day, three days a week, and rotary sprinklers were going much of the rest of the time, all from one hose bib on the house.

In the fall of 2007, Ben worked with the Parks Department to secure permission to install the system. In exchange for our parts and labor, parks offered to pay for the installation of the water meter, and the water. We thank Parks daily for this generous offer.

In the fall of 2012, we were the lucky recipients of a surprise grant from the Raynier foundation. This grant has allowed us to hire Creative Bros Landscape. We have now doubled the irrigation in the garden, and now have most of the critical areas watered. We are absolutely thrilled by this and expect that our summer hand watering needs will drop by half because of the generosity of our friend and former neighbor Jim Ray.

During the summer and fall of 2014, Ben continued the irrigation system. Fearing the huge disturbance than underground pipes would cause in the sandy slope, and realizing the most of the rest of the area that needs to be watered are mature shrubs, we've decided to try point-source irrigation. Ben laid almost a 1000 feet of flexible ½” tubing on the surface, buried in the ivy. From here, another 500 feet of ¼” tubing allows precise water delivery to each plant.

We have a very difficult site for irrigation. Some of the challenges include:

To get around the power issue, we are using a high-tech Leit X 10 station controller which is solar powered. To help make the system the most efficient possible, we are using a rain sensor and MR rotator nozzles. These nozzles allow us to apply water at a greater distance than typical spray nozzles, but also have the added benefit of applying water at a very slow rate which is a blessing on a steep hill.

Our hand watering needs are now cut down to almost nothing, except for tending to new plants which haven’t received enough water and establishing new plants in the greenbelt. 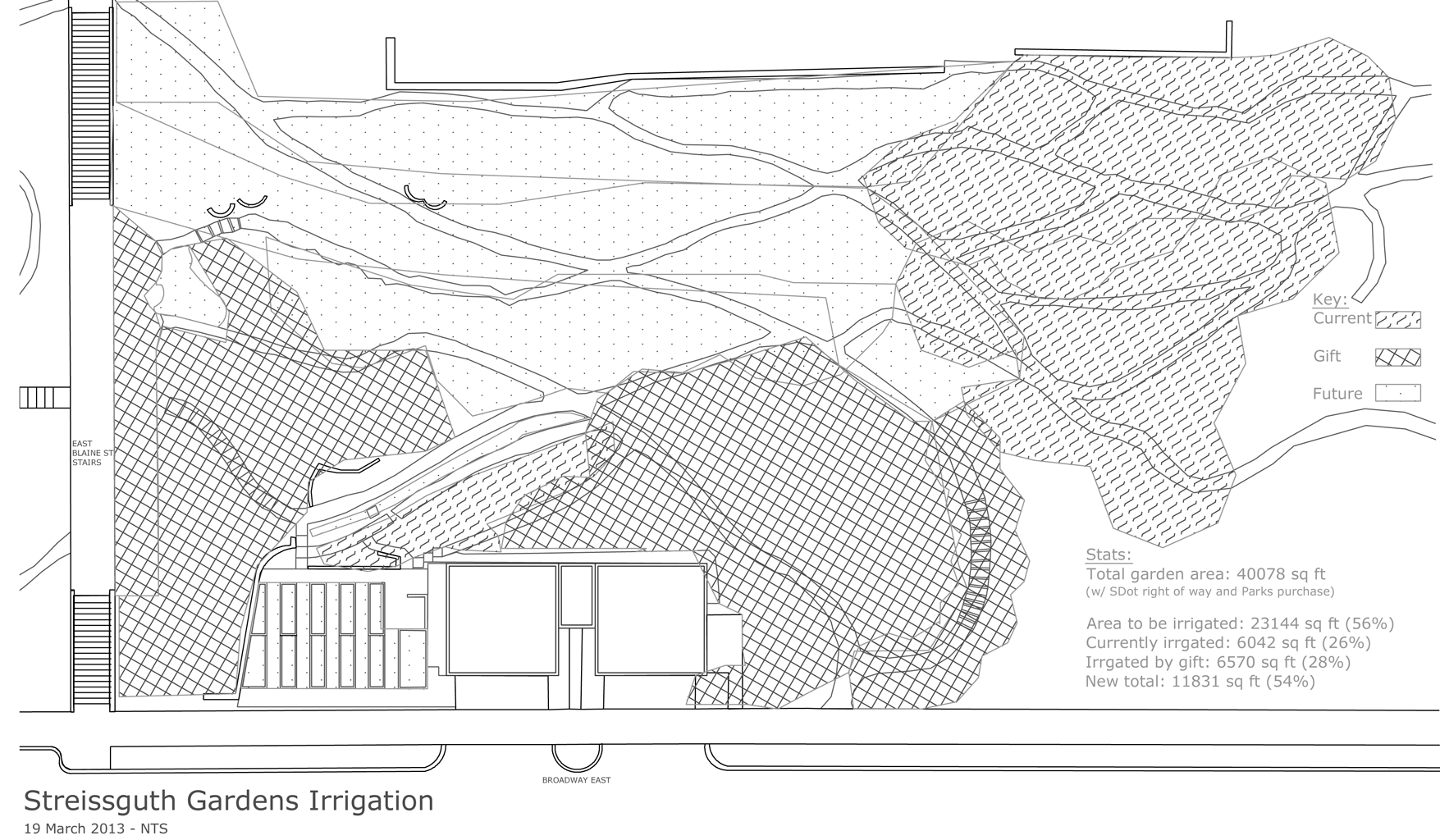